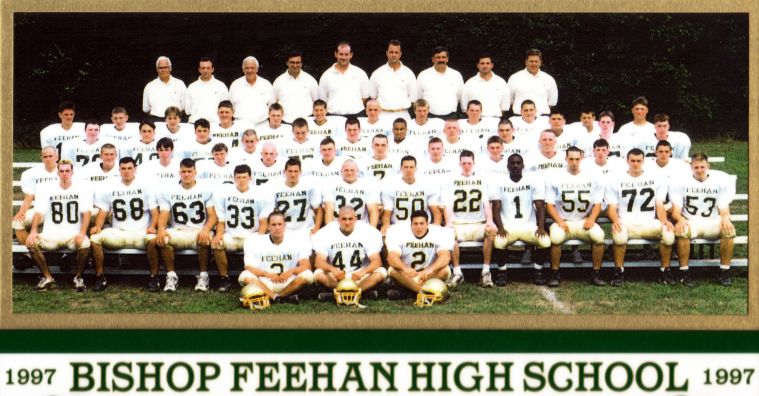 As it began its 35th season of varsity football, hopes were high for the Bishop Feehan football team. Returning several senior letter men as well as many underclassmen with appreciable varsity experience, Coach Gary Doherty and the Shamrocks were looking forward to a productive season. Foremost among returning starters were co-captains, Joe Gazzola and Mike Cataldo, conference all stars from a year ago and two of the most formidable linebackers in the state. Tailbacks Chris Okinflami with speed to burn and Renato DePaolis who combined catlike quickness with explosive bursts gave the Rocks a powerful running game. As with any successful team, the strength is found in the the trenches. Leading the way was returning letterman, tackle Steve Fletcher . At the other tackle was junior Brett Svendsen. The Nighelli brothers, Rich was a guard and Dave was the center with Steve Harper manning the other guard position with junior Derek Chabot also filling in.. Junior Justin McGowan was selected to play quarterback. He would prove invaluable as the season wore on.

It was not an auspicious beginning. After blowing out Stoughton 28-0 with DePaolis scoring three touchdowns and kicker John Hartshorn converting four successful PAT's, Feehan lost a heartbreaker to North Attleboro in one of the most exciting games of the season. With the Rocketeers leading 7-0, fullback Joe Gazzola seemingly carried half the North defense into the end zone with under a minute to play. Going for the win, Coach Doherty had Renato DePaolis take a pitchout; he zigzgged right, then left, then right again and floated a pass that John Traversi miraculously caught among three Rocketeer defenders for an apparent Shamrock victory only to have a penalty flag nullify the play. On the succeeding try from eight yards out this time, the North defense smothered the attempt and won the game. A flat performance against Coyle the following week resulted in a scoreless tie. So after three games, Feehan was only 1-1-1.

Then, the team put it into overdrive. Avenging last year's loss to Attleboro, the Shamrocks defeated the Bombardiers 28-14. Following that win, Feehan ran off five more straight victories in a row. Two particularly pleasant surprises were the steady play of QB Justin McGowan who would finish the season with 12 TD passes and placekicker John Hartshorn who had kicked four field goals over the course of the season and rarely missed an extra point. In a 49-6 blowout of Somerset that clinched the Eastern Conference Championship, Hartshorn successfully kicked the extra point after all seven TD's. While the offense cranked it up scoring four or more touchdowns in five of those victories, the defense actually became the hallmark of the team's success. With Gazzola and Cataldo leading the charge, the Shamrocks shut out three opponents and limited the others to two touchdowns or less. Nonetheless, it was the defensive line, made up mostly of the starters on offense, who stuffed opponents running game and flustered their passing game. Steve Harper, Rich and Dave Nighelli, Steve Fletcher, Brett Sevendsen,and junior John Stanovitch took on the double teams and shut down the trap blocks that enabled the linebackers and secondary to stop opposing offenses. Tyler King was developing into a complete football player at defensive end. Defensive specialist and captain, Jeff Laroque, was a particularly vicious tacker and protected the secondary in his role as a free safety and corner back Chris Okinfalmi used his speed to close down the outside run as well as prevent the deep pass completion. He also proved to be an effective offensive weapon throughout the season with six TD's.

After blowing out Bellingham 42-13 on Thanksgiving (a “one and done” opponent), Feehan finished the campaign 9-2-1 and prepared for their second Super Bowl in four years. The much anticipated build up between the Shamrocks and Duxbury, the Atlantic Coast Conference champion, resulted in an emphatic 26-7 victory for Feehan. The offense was a one man show with Renato DePolis scoring four touchdowns and amassing over 240 yards rushing. Once again, Gazzola, Cataldo,and Company led the Feehan defense by holding the Dragons high powered offense to less than 100 total yards. Duxbury's only score did not come against the defense but from an interception returned for a TD in the fourth quarter. It was the first ever Super Bowl win in the school's storied football program and laid the foundation for six more Super Bowl championships to follow in the first decade of the twenty-first century.

Head Coach Gary Doherty, just 28 years old at the time, won 17 games in his two year tenure as head coach at Bishop Feehan. He left at the end of the school year to assume the head football coaching job and subsequently became the Athletic Director at Framingham South where he still is today. As any head coach would readily agree, he is only as strong as his assistants. The 1997 coaching staff in addition to Doherty was comprised of Steve McGonicle, Mike Deady, Paul O'Boy, Bill Fasulo, Jim Gerard, John Muller, Mike Yuroff, and Owen James. Without these dedicated men, the championship would not have been possible.

From a farmland of knee high grass fifty years ago where the first football team laced up their cleats, to 35 years of “home” games at Hayward Field in Attleboro, to a state of the art stadium with artificial turf on their own campus, Feehan football has come a long way. But it is not so much the victories, the conference championships, or even the seven Super Bowl wins that have characterized the program, but,rather the transcendent virtues of discipline, humility, faith in God, faith in oneself, and faith in one's teammates (in the words of the venerable Paul O'Boy) that have taught life's lessons to these boys striving to become men. May they continue for another fifty years.

Trackback https://www.attleboroareafootballhof.com/hof/4065/ac4/trackback
Up Down Print
?