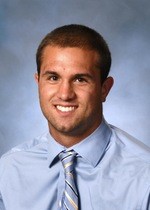 Brett Mastropoll was everything the Rocketeer coaching staff could hope for in a player. He was tough, smart, unselfish, and versatile. This combination helped Mastropoll to excel in all three phases of the game. As a running back on offense, a linebacker on defense, and punter on special teams, Brett’s impact on the game was always being felt. According to Coach Don Johnson, “not only was Brett versatile on the field, but he was a great teammate who always found a way to make hard work fun.”

As a junior, Brett’s versatility allowed him to contribute all over the field. As a running back/split end, he would rush 43 times for 216 yards (5 yards per carry) and catch 8 passes for 78 yards. Against Stoughton he would receive snaps in the wildcat formation and later in the game he would block a punt resulting in a Rocketeer touchdown. Speaking of punting, he himself would punt 13 times for 35.5 yard average. On the defensive side of the ball Mastropoll would record 26 tackles, 5 assists, and a sack. If something positive was happening on the field, there was a good chance Mastropoll was involved.

As a senior, Mastropoll would rush 81 times for 577 yards (7.1 yards per carry) and 4 TD’s to lead the Rocketeers to an 8-3 record. He also caught 15 passes for 173 yards and punted 27 times with an average 40.2 yards per punt. From his linebacker position, Mastropoll finished with 30 tackles, 4 assists, and a sack. Brett also recovered an onside kick in a thrilling come from behind victory over arch-rival Mansfield.

In Brett’s final game against Attleboro, his versatility was on full display. He accounted for 124 total yards on offense, pinned the Attleboro offense at their own 6-yard line after a booming 46-yard punt, and led a defense that completely stymied the Attleboro offense holding them to a measly 12 points in defeat. Brett was selected as the defensive MVP and awarded the Balfour Trophy.

For his efforts as a senior, Brett was selected as both a Sun Chronicle and Hockomock League All-Star. He also was selected as Big Red’s defensive player of the year. After graduation, Brett went on Quinnipiac University where he earned a Bachelor’s degree in Sports Medicine/Athletic Training and then to Carson Newman University where he received his Master’s degree in Business Administration.