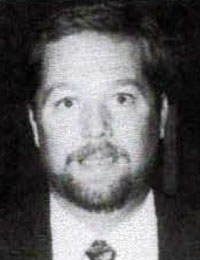 In 1976 and 1971, Kevin Deschenes continued Attleboro's long tradition of developing outstanding offensive centers. Although listed in the program at 5'8" and 160 lbs., it is doubtful that Kevin ever reached the 150 lb. mark. What he Jacked in size he made up for in what coaches and teammates call "heart". Described as one of the toughest players to ever wear the Blue and White, Deschenes was consistently matched against lineman who outweighed him by fifty pounds. A fierce competitor with excellent quickness, Kevin relied on great fundamentals and technique to beat his opponent off the ball and drive him away from the play. He developed outstanding footwork and perfect positioning so that he could control the penetration of even his biggest opponents.

Co-Captain Deschenes was immense during Attleboro's brilliant 1977 Championship 7-1-2 season in the very tough Div I Southeastern Mass Conference. His tough, determined style of play set the tone for the rest of his teammates as he repeatedly threw the key block that powered Attleboro over tough opponents Silver Lake, Feehan, Taunton, Falmouth, Durfee, New Bedford, and North Attleboro. Long time area line coach and Hall of Farmer John McKenna, called this "the best team he was ever associated with and Kevin Deschenes was one of the two best players that I ever coached".

Selected as a Sun District AU Star in 1976 and 1971, Kevin was described as "small in stature but not in heart who matched strengths on a weekly basis with powerful 200 pound lineman in Div I, but more often than not came out on top". Kevin is currently an assistant coach at Attleboro High School.

Trackback https://www.attleboroareafootballhof.com/hof/3060/5ac/trackback
Up Down Print
?