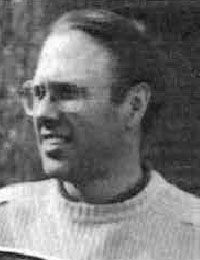 In 1960 and 1961, Tom Carpenter was a brilliantly versatile and efficient halfback on two very good championship Attleboro teams. A swift. slashing type of runner, the talented Carpenter was just as dangerous running from scrimmage, throwing and receiving passes, returning kickoffs and punts, or intercepting passes from his safety position. In addition, Tom was a brilliant downfield blocker who would frequently spring teammates for long gainers.

In the 1960 Turkey Day game, Carpenter calmly moved from halfback to quarterback to lead AHS to a 12-0 victory and was voted the first recipient of the L.G. Balfour Trophy as the game's MVP. As a senior, co-captain Carpenter returned to his halfback slot and led the Bristol County League in scoring with 78 points and 12 touchdowns while passing for two more TD's. Included in the totals were two three-touchdown games, a brilliant 85-yard kickoff return, and several clutch touchdowns. In an unexpected loss to Dover, Carpenter scored all of Attleboro's points on two touchdown runs and a two-point conversion run while intercepting a pass.

Although weighing only 145 pounds, Tom hit the line like a fullback and excited fans with the great quickness and broken field running skills which earned him All Sun District and All Bristol County honors.

Trackback https://www.attleboroareafootballhof.com/hof/3006/beb/trackback
Up Down Print
?