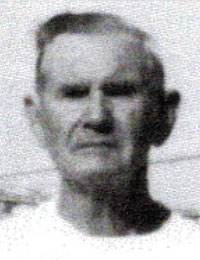 During two undefeated seasons in 1941 and 1942, Ken Charest anchored the center of a line that paved the way for a host of Hall of Fame backs. Tough, steady and dependable, Ken's long center snaps and devastating lead blocks were critical to Attleboro's high scoring double wing-motion offense. For two seasons the powerful Charest-led Bombardier front line outplayed opponents by a score of 319 to 64. During that time, the durable Charest was the only center listed in the Blue and White starting line-up.

An outstanding two-way starter, Ken demonstrated all his football skills and talent as a defensive linebacker. The gutsy, 156lb. track star used his outstanding speed to run down opposing backs, as he roamed from sideline to sideline. With his great football instincts, Ken was always in the right spot to knock down or intercept opponent's passes. One of his many great individual efforts included an interception and touchdown run in a tough 12-0 win over Milford.

Although surrounded by many stars who received mo t of the glory, Ken Charest may have been the steadiest performer on Attleboro's greatest teams.

Trackback https://www.attleboroareafootballhof.com/hof/2954/ed6/trackback
Up Down Print
?