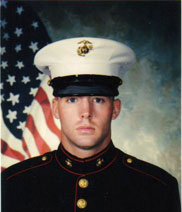 Joe Simpson, Class of 1995, was a three year varsity player for the Attleboro Blue Bombardiers.  Joe’s toughness and dedication earned him the respect of coaches and teammates alike.  Simpson always played with reckless abandon when racing down field to make a tackle on special teams as a sophomore, or filling a gap from his linebacker perch as a junior and senior.  Simpson, along with Hall of Famers Chris Burns and Rich Rebelo, arguably make up one of the most dominant left sides of an offensive line in not only AHS history, but area high school football history!

Simpson had the sound technique, speed, and mean-streak that coach Cliff Sherman was looking for in a guard for Attleboro’s explosive offense.  “He’s not only a good straight ahead blocker, but he’s good at trapping and sweeps, too,” stated Sherman.  Simpson was instrumental in opening holes for 1,000 yard rushers and Hall of Famers Dave Menard & Jesus Duran.  Simpson was also forceful when pass blocking and securing a pocket for Hall of Fame Quarterbacks Tom Sherman & Ted Larkin.  Simpson, who often had blood running from the bridge of his nose because of his hard-hitting style, was the hammer in the middle of the AHS defense during his junior and senior seasons.  As a senior Joe recorded 92 tackles (53 which were unassisted), one sack, three fumble recoveries,  and he had an interception in a 57-20 thumping over Coyle-Cassidy.  Simpson fondly remembers beating Mansfield, 46-32 at Memorial Field in Mansfield, and dominating North 22-8 on Thanksgiving Day, in 1994 at Tozier-Cassidy Field, where the offensive line controlled the line of scrimmage in the second half to protect the victory.

For his outstanding play as a senior, Simpson was recognized as an All Star by both the Eastern Athletic Conference and The Sun Chronicle.  In addition, Joe was selected by his coaches and teammates as the recipient of the Bombardier Award.  Joe went on to play college football at Framingham State and semi-pro football in Finland.  Joe also served in the United States Marine Corp for over four years, and today he works for Maynard Construction.

Trackback https://www.attleboroareafootballhof.com/hof/709/354/trackback
Up Down Print
?