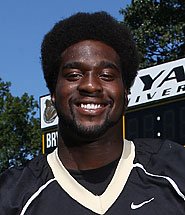 Don Smith was a two way force along the Bombardier offensive and defensive lines. Smith used his strength, athleticism and technique to open up holes for AHS’s rushing attack and smothered his opposition when Attleboro’s aerial game was called on to move the ball. Like a typical player in the trenches, Don Smith did not garner all the newspaper headlines, but his play was acknowledged by Head Coach Kevin Deschenes, his Attleboro teammates and opposing teams.

During Don’s junior season the Bombardiers averaged over 12 yards per reception and almost 6 yards per rushing attempt, with many large gains caming from Smith routinely over-powering defensive lineman. Fellow inductee Mike Palermo was often the recipient of holes carved out by Smith firing off the line. The versatile Smith used his knowledge as an offensive lineman and wreaked havoc on opposing offenses while anchoring Attleboro’s defense. AHS beat Durfee, Coyle-Cassidy, New Bedford and Somerset in consecutive weeks and Big Don Smith was a force on both sides of the line of scrimmage. The Bombardiers averaged 27 points on offense and had one shutout defensively during that run. Don was credited with (5) quarterback sacks and (1) fumble recovery, while making (53) tackles, (41 unassisted) during his junior year.

Don’s senior season brought more headlines for the Bombardier quarterback, running backs & wide receivers, but without the solid play of he and his line-mates AHS would not have been able to move the football. Against Colye Cassidy, the Bombardier line led by Smith controlled both sides of the trenches, enabling the Blue & White to score 27 points while holding the Warriors to 7 point on their way to a convincing EAC victory. Defensively, Smith finished his senior campaign with (62) tackles (42 unassisted), (2) sacks, (1) forced fumble and (1) fumble recovery.

Don Smith earned multiple EAC All Star and Sun Chronicle All Star honors for his outstanding play. Don continued his football career at Bryant University where he was again was recognized for his exceptional play as a two time All New England All Star and the 2009 NEC sack leader. Smith graduated from Bryant with a Management and Marketing degree and is currently employed at Maxim Healthcare Services.

Trackback https://www.attleboroareafootballhof.com/hof/559/609/trackback
Up Down Print
?