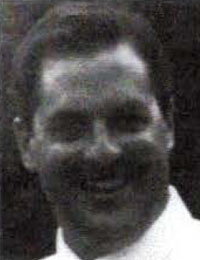 Kyle Stone was an extremely versatile threat on North's first two teams in the highly successful decade of the 1980's. A true pass receiving tight end, Kyle surpassed his 3 receptions as a junior with 26 receptions for 393 yards and 3 TD's as a senior captain. Those 26 receptions represent the most catches in a season by a North Attleboro tight end.

Kyle's contributions did not end in the end zone however. He was one of North's most prolific kickers as well. In his Junior season Kyle kicked 17 PAT's and averaged over 52 yds. per kickoff. As a Senior, he kicked 22 PAT's and a school record 6 field goals, in addition to punting 28 times. For his career, Kyle's kicks were the deciding margin in 5 Big Red victories by 2 points or less, including a memorable field goal in North's 9-7 win over Attleboro in 1980.

Remarkably, Kyle was also an outstanding defensive player who recorded over 30 tackles in his two years at defensive end. It was no surprise when Kyle Stone was awarded the Balfour Trophy for his role in a North 24-13 victory over Attleboro on Thanksgiving Day in 1981.

Upon graduation from NAHS, Kyle continued his career at Plymouth State College.

Trackback https://www.attleboroareafootballhof.com/hof/3399/a97/trackback
Up Down Print
?