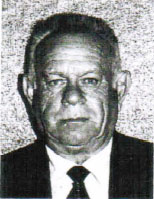 Trench warfare. That's the term that best describes the way Bob St. Martin played the game as an interior lineman and linebacker for the Red Rocketeers in the early 1940s. Nicknamed "Bull" by his coach, the legendary Raymond Yates, Bob St. Martin gave every bit of himself on every play during an era when drives into the line constituted the offensive game plan for most high school teams. A two-way player, Saint handled the snaps for the single wing on offense and was a dependable and intelligent play diagnostician as a linebacker on defense. Though North teams of that era enjoyed only indifferent success. Saint - who played as a sophomore and started as a junior and senior - gave winning performances every time he stepped onto a gridiron. After graduating, he played briefly at Tufts before entering the service and performing as a pivotman on the Georgia Pre-Flight team, one of the standout service aggregations which dominated college football during the war. One of the most devoted Red Rocketeer fans of all time, " Saint" has seen all but a handful of North's games over the last four decades. In terms of loyalty and dedication, nobody has given more of himself to North football - as player and fan - than Bob St. Martin.

Trackback https://www.attleboroareafootballhof.com/hof/3271/fd8/trackback
Up Down Print
?