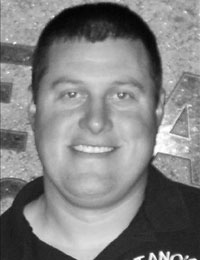 As it opened its season, the 1998 Bishop Feehan Football Team had some good news and some bad news. The good news was they were to christen the newly minted McGrath Stadium and play its home games on campus for the first time in the school’s history. The bad news was they were following a team (being honored this evening) that won the school’s first Super Bowl and graduated seven starters including five conference All Stars. Nonetheless, hopes were high for the Shamrocks under first year coach, Steve McGonigle. QB Justin McGowan was returning as well as linemen Dave Nighelli, Derek Chabot, Brett Svendsen, Tim Downing and Dave Dubois who all gained appreciable experience in the previous year. Tight End/ Defensive End, Tyler King was also impressive on the championship team from last season. Nonetheless, the driving force of this year’s squad was John “Stano” Stanovitch.

Standing 5'9" and 185 solid pounds, Stanovitch personified the blue collar—lunch pail mentality of this year’s team. As a sophomore, he rushed for over 1000 yards playing for the junior varsity. As a junior he saw a lot of action on defense playing in nine games. In addition, he was a backup fullback who ran for a 21 yard TD against Bellingham on Thanksgiving. Coach Gary Doherty described him as “A true runner with excellent vision.” As a senior playing for Coach McGonigle, “Stano” was a devastating blocker for running backs John Traversi, Eric Silva, and Scott Connolly as well as a powerful runner who produced key first downs and scored eight touchdowns for the season. Despite missing two games to an ankle injury, Stanovitch still rushed for over 600 yards, many of them after initial hits that required second and third efforts. In a 17-14 win over Coyle, “Stano” rushed for 63 yards and a touchdown on 17 carries. The “workhorse” (according to his coach) then rushed 16 times for 143 yards including a 71 yard sprint in a 17-14 loss to Durfee.

In a 28-0 romp over Somerset, “Stano” carried eight times for 69 yards and scored two touchdowns. The highlight of the season and one of most memorable victories in the annals of Bishop Feehan Football was a shocking 21-20 win over a powerful Whitman-Hanson team who entered the game with a 7-1 record. Stanovitch had a typical “rock em-sock-em” game with key blocks on linebackers to open up the running game and scored two touchdowns himself including the game winner late in the fourth quarter. In his last game, played on Thanksgiving at McGrath Stadium, Feehan overpowered Malden Catholic in a 42-6 mauling. Playing just one half due his recurring ankle injury, Stanovitch still rushed for over 100 yards on 13 carries and scored two touchdowns.

For his efforts, John Stanovitch was named an EAC All Star, a Sun Chronicle All Star and a Pawtucket Times honorable mention selection. The Attleboro Area Hall of Fame welcomes a true “dirt dog” and hard-nosed scrapper, John “Stano” Stanovitch.

Trackback https://www.attleboroareafootballhof.com/hof/2432/71c/trackback
Up Down Print
?