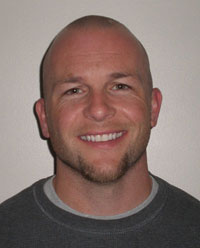 If anyone ever told John Sawyer that he was too small to play high school football, Coach Ray Beaupre and the Red Rocketeer faithful are forever grateful that he didn’t listen.  In September 1992, the 5'6" 150 pound sophomore put on the red and white for the first time, and for the next three seasons would be an integral part of North’s success.  John’s outstanding performance as a linebacker-fullback were a direct result of his tough hard-nosed style of play.

During his sophomore season John had a breakout game against King Philip.  In a 34-29 loss he carried the ball 15 times for 145 yards and scored three times.  Later that same season he had an important fumble recovery to thwart an Attleboro drive in North’s big 19-16 Thanksgiving Day upset at Attleboro.

The following year Sawyer was a defensive standout on North’s undefeated Super Bowl team.  He was one of the team’s leading defenders with 53 unassisted tackles and 22 assists.  In a big 14-0 win over Foxboro he had a huge fumble recovery and played a significant part of a defensive stand which saw North stop Foxboro on six successive plays inside the ten yard line!  Sawyer finished his junior year with a strong performance.  In North’s 42-7 super bowl win over Whitman-Hanson, he led the team in tackles and was recognized as North’s defensive player of the game.

John captained the 1994 North squad and was a strong two-way performer.  Defensively he had 43 tackles, 10 assists and 1 interception, while offensively he carried the ball 38 times for 259 yards and 5 touchdowns.  His best offensive performance came in a 41-8 win against Foxboro when he carried the ball 10 times for 95 yards and a touchdown.  John’s importance to his team defensively was made evident by his absence.  During a three game win streak with Sawyer on the field North allowed a total of 7 points.  The following week when he was nursing an injury, North lost 22-13 to Oliver Ames.

At the conclusion of the 1994 season, John Sawyer was selected as an All-Star by The Sun Chronicle, The Hockomock League and the Boston Globe.  Because of his dedication, desire and devotion, John was also the recipient of the Thomas G. Bury Award.

Trackback https://www.attleboroareafootballhof.com/hof/647/a89/trackback
Up Down Print
?