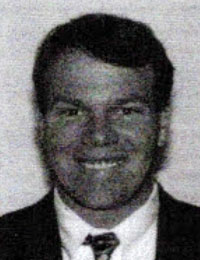 Steve Savard was a good all around football player for North During the seasons of '76', '77' and '78'. Whatever be was asked to do he did it well. Over the course of three seasons Yogi handled kick-offs and extra points almost flawlessly. Offensively he was one of the team's leading ground gainers, and on defense he led the team in tackles.

During the late 70's North's kicking game was one of the team's many strong points. Every touchdown was almost an automatic seven points. Steve attempted 59 extra points during his three varsity seasons and converted 56 of them. His kick-offs averaged 46 yards, often giving the opposition poor field position after North scores.

Offensively Yogi emerged as a legitimate running threat during the 1978 season. From his full back position he carried the ball 87 times for 548 yards and 8 touchdowns. In addition he caught 4 passes for 25 yards. In a 27-0 victory over Oliver Ames, Savard scored 2 touchdowns and gained 93 yards in 10 carries. On Thanksgiving Day in 1978 Savard scored the only touchdown and kicked the extra point in a 7-0 victory over Attleboro.

Defensively Steve had an impressive 3 year career as a starting linebacker. He mad 145 tackles, had 117 assists and 2 pass interceptions. The Sun Chronicle described his defensive abilities best " Perhaps the best all-around player this year was North Attleboro's senior Steve Savard, one of the hardest hitting linebackers in the ares, and a virtual brick wall for opposing runners."

For his achievements on the gridiron 'Yogi' was selected as a linebacker to both the Sun-Chronicle and Hockomock league All-Star Teams. After graduation he attended the University of Massachusetts where he continued his football career.

Trackback https://www.attleboroareafootballhof.com/hof/3385/e71/trackback
Up Down Print
?