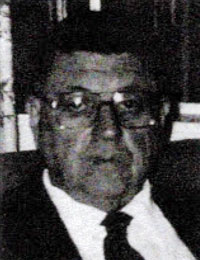 Aunie Ryder was a mainstay of the Red Rocketeer line for two years during the latter days of the Ray Yates era. As a junior tackle, Aunie was a major contributor to one of the stingiest defenses in the history of North football. While going undefeated, the Red and White gave up only two touchdowns and a single conversion in eight games, climaxing the 1940 season with a 6-0 win over Attleboro during which the Bombardiers chalked up only 80 total offensive yards. Although

North's fortunes declined in 1941 , Aunie, who had switched to center, continued to dominate as a two-way performer. At 198 pounds, he was a powerful force and an intelligent performer throughout his career and typical of the dedicated North players who performed for Raymond Yates during that era.

Trackback https://www.attleboroareafootballhof.com/hof/3265/3eb/trackback
Up Down Print
?