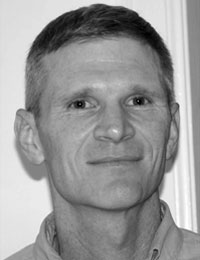 Scot Sackett did not fill up the stat sheet, but he was a reliable football player that seldom missed an assignment. Sackett’s versatility and desire to make an impact on the gridiron was not overlooked by Bombardier head coach Chet Hanewich. Scott was always on the field, whether it be offensively as a split end, defensively at safety, or on special teams. Sackett was a punishing football player who enjoyed the contact and routinely was around the action. Scot’s AHS teammates also knew he would come prepared to play, whether at practice or during game action. Sackett was a quiet leader that led by example on and off the field, and his teammates respected him.

The athletic Sackett remembers Thanksgiving Day 1986 when Attleboro and North played to a 6-6 tie in front of a large crowd at Tozier-Cassidy Field. The sure-handed Sackett, wearing #3, made a great catch in the left corner of the end zone from Hall of Fame quarterback Jim Hanewich for the Blue & White. The headline in the paper read “No Satisfaction for Attleboro, North”, however Scott fondly remembers his battles on Thanksgiving morning as he was also part of the AHS team that beat North Attleboro 7-3 in the 1984 classic. Sackett snagged a touchdown from Hanewich against Bishop Feehan as Attleboro went on to secure the victory and Elk’s trophy against their cross town rivals. Scot joins his younger brother, Shane Sackett (AHS ’91), in the Attleboro Area Football Hall of Fame.

Trackback https://www.attleboroareafootballhof.com/hof/2421/fb2/trackback
Up Down Print
?