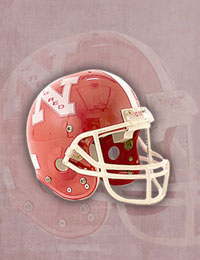 As a 6', l65lb junior in 1990, Brian Sankey assumed the reigns as North Attleboro's quarterback. For the next two seasons the smooth-throwing lefthander helped lead the Rocketeer's to a 19-2 record, and the first lO-win season at North since Bob Guthrie's early-70's Super Bowl Champions.

Brian's junior season in particular was quite remarkable. Throwing to 6'5 tight-end Chris Sullivan and 6'6 split end Jason Mikulis, Sankey improved significantly with every game. For five straight mid-season contests he threw for two touchdown passes per game. In a battle against the 6-0 and division III-leading Canton Bulldogs, Sankey threw 2 TD passes in a thrilling 14-7 Rocketeer victory. In a 16-0 victory over Oliver Ames, Brian passed for 165 yards, including 77 yd TD to Mikulis, and recovered a teammate's 3rd quarter fumble in the end zone to help clinch the Big Red's first Hockomock League title ever under Head Coach Ray Beaupre.

Brian's poise and precision was on display for all to see Thanksgiving morning, when he completed 12 of 13 passes for 152 yards, 3 TDs, and 4 conversion passes in a crushing 52-6 defeat of a 7-2 Attleboro squad. His efforts earned him the LG Balfour Trophy as the game's MVP, and capped an incredible season in which he threw 16 TD passes and just one interception.

The two-time Sun Chronicle and Hockomock League All Star finished his career with 2,175 passing yards and 26 TD passes. Following graduation, Brian went on to a stellar baseball career during which he captained the Boston College Eagles, earned 1st Team All Big East honors, and was drafted by the Los Angeles Dodgers in the 1996 Major League Draft. Upon retiring from Major League Baseball, Brian returned to the Attleboro area to lead Bishop Feehan to the 2001 Div II South Sectional Baseball Championship, and presently he is teaching at North Attleboro High School.

Trackback https://www.attleboroareafootballhof.com/hof/2169/008/trackback
Up Down Print
?