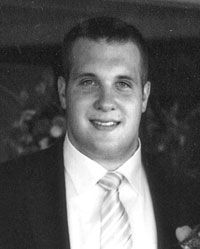 In the game of high school football there are a very few players who have a dynamic presence on both sides of the ball. Jared Perkoski was one of those few. The 6’3” 214 lb. Perkoski was a hard charging fullback on offense and a devastating linebacker defensively.

In 1997, Jared’s sophomore year he started at linebacker for the Red and White against a tough Xaverian team. North lost that game, but it would be the only loss the Rocketeers would suffer during Perkoski’s three year career. For the rest of the ‘97 season and the next two seasons the Rocketeers won 33 games in a row and 3 Super Bowl titles, and Perkoski was an important part of all three teams.

As a sophomore linebacker he had 36 tackles, 8 assists and 2 fumble recoveries. In a big 42-15 win over Mansfield, Jared had 2 quarterback sacks and a fumble recovery for a touchdown, and he was named the Ro-Jack’s player of the game.

During his junior year Jared emerged as a hard running fullback,. carrying the ball 83 times for 577 yards and 6 touchdowns. In addition he caught 8 passes for 141 yards and 3 more touchdowns. He scored twice in an 18-7 win against Mansfield and two more times in a 35-14 win over K.P. He scored once in a hard fought 21-6 Thanksgiving Day win over a good Attleboro team, and once again in North’s 33-14 Super Bowl win over Attleboro a week later. Defensively that same year he accounted for 48 tackles and 13 assists.

Jared captained the 1999 Rocketeers. In a 28-6 victory at Mansfield he carried the ball 11 times for 114 yards which included a 34 yard T.D. run. In a 33-3 win over K.P. he carried 11 times for 136 yards and a touchdown, and week later he scored 3 times in a 40-14 win over Franklin. While scoring his 3rd TD Jared suffered a torn ACL in his knee which sidelined him for the rest of the regular season. After missing those three games, Jared made an inspirational comeback and played the first half defensively in his team’s 26-6 Super Bowl win over Rockland.

Jared Perkoski was recognized for his accomplishment on the gridiron by being selected twice as a Sun-Chronicle All Star and twice as a Hockomock All Star. His senior year he was the Hockomock League All Star defensive MVP. He was also selected as a Boston Herald All Scholastic and played in the Shriner’s All-Star game. After graduation he attended the University of New Hampshire where he played football all four years.