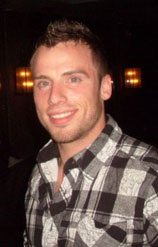 Mike Palermo gave 100% on every play. Whether on defense or offense Palermo was a max effort player who loved the preparation and led by example. Mike was not the biggest at 5'6" and 140 pounds; however, pound for pound he was arguably the strongest player on the field each week. Palermo played three years of varsity for Big Blue patrolling the defensive backfield when he was not excelling as a running back, where he led AHS in rushing during his junior and senior seasons.

During his sophomore season Palermo found his way onto the field and contributed as a defensive standout at cornerback. While gaining experience in the Bombardiers rushing attack he amassed 613 yards total & (3) touchdowns along with being Attleboro's No. 2 receiver with (17) receptions. In defeating a talented Dartmouth team 15-3, Palermo total 228 total yards (176 on the ground & 52 through the air) and (1) touchdown! Mike received the Ro-Jacks player of the Game for his strong effort vs. Coyle Cassidy as he rushed for 123 yards and made a number of big plays defensively. As a junior Palermo rushed for 1,260 yards while averaging 7.4 per carrying and grabbing (16) receptions. Palermo led the Blue & White in touchdowns with 10 total (9 rushing & 1 receiving). The always intense Palermo carried the load in beating Franklin 13-7, rushing for 157 yards and finding the end zone twice. "Mike's a clutch player. He's one of those kids who wants the ball," said head Coach Kevin Deschenes after the victory. In thumping Somerset 35-21, Mike rushed for 193 yards on just (14) carries and one touchdown (a 48 yard scamper), and he also set-up another AHS score with a nifty 64 yard run.

As a captain his senior season Palermo once again led AHS in rushing with 936 yards while averaging 16 yards per reception and scoring (7) touchdowns while missing two games due to injury. Defensively, Mike Palermo was in on (24) tackles to go along with two interceptions. Mike was recognized as the NESN Player of the Game vs. New Bedford for his terrific performance in beating the Whalers, 21-18.

Mike noted that "playing side by side with his brother Chris" during his junior and senior was "one of the greatest memories" of his high school football experience.

Palermo received many awards for his exceptional play including Sun Chronicle All Star and EAC All Star during his sophomore, junior and senior seasons, and the Boston Herald Player of the Week several times throughout his outstanding AHS career. Mike continued playing football at Stonehill College and now works as an assistant manager at CVS.