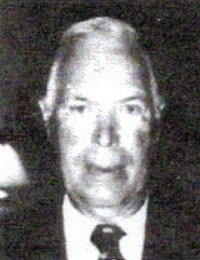 Leon Peao brought three special qualities to his assignment as an end on a series of standout North teams of the late Thirties- speed, intelligence, and exceptional athletic ability. As a two-way performer in an era when players routinely played without relief, Leon contributed both offensively and defensively as a dangerous pass receiver and a sure-handed tackler. After closing out an outstanding high school career, Leon played for the North Townies, where he hooked up as a receiver with Hall of Fame passer Chet Bodinski. Leon went on to Boston University, where he enjoyed a brief collegiate career as a running back. An honor student and a gentleman, Leon Peao enriches the Hall of Fame with his presence.