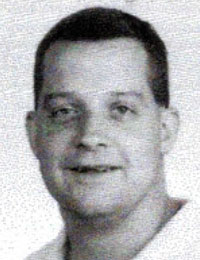 ln 1984, as an outstandingly versatile athlete, Greg Payette led a talented Attleboro team back to football respectability and an 8-1-1 record. A very tough, do-everything back, Payette played quarterback, wide receiver and defensive back. He returned kickoffs and punts while handling all of Attleboro's kicking chores. During the '84 season, Greg passed for 750 yards and six TD's, had 150 receiving yards and two more ID's, and 5 interceptions. In a brilliant43-21 victory over Barnstable, Payette passed for two touchdowns, rushed for one ID,lcicked a 22 yard field goaJ and two PATs.

Payette again showed his great physical talents and outstanding football sense in Attleboro's 7-3 Turkey Day victory over North, its first in seven seasons. After starting at quarterback, Greg switched to flanker, diagramed a new pass play, and made a brilliant leaping catch for a 38 yard winning touchdown with 1:36 left on the clock. He later secured the win with an interception in the Bombardier end zone.

A 1984 All Sun District and All conference selection as a defensive back, the competitive Payette will long be remembered as one of Attleboro's best all-around athletes.