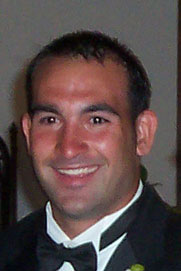 Seth Lopes was one of the best all around football players this area has seen.  Seth could cover and tackle on defense, return kicks or punts the distance on special teams, and score from anywhere on the field offensively whether rushing or hauling in a pass.  Seth’s unique skill-set forced every opponent to plan for his impact in all three phases of the game.

As a sophomore Lopes versatility was noticed by Coach Sherman and his teammates. Seth’s experience paid dividends the next two seasons as the Bombardiers went to the Division 3A Super Bowl.  On his first two carries of the second half in a 33-13 victory over Milford his junior year, the tough and speedy Lopes ran for 52 and 55 yard touchdowns on his way to gaining 190 yards of total offense.  Offensively Seth displayed his value on the field by finishing his junior year averaging 8.3 yards per rush scoring 5 touchdowns, and defensively he was a huge part of Attleboro’s success with 126 tackles and 5 interceptions as the Big Blue shutout 3 opponents!

As a senior captain Seth Lopes had a sensational season!  Going into Bishop Feehan with a 3-0 record, Lopes followed hard hitting fullback Mark Owens to gain 215 yards of total offense, three TD’s, and two extra points as the Bombardiers dismantled their cross-town rival 24-10.  Seth continued his dominance a few weeks later, gaining 249 yards on the ground and through the air to go along with three touchdowns as AHS beat Longmeadow 22-12.  Lopes finished his senior year with over 1,600 all-purpose yards and 24 touchdowns while leading the area in scoring with 160 points.  Defensively, Seth snatched four interceptions and led the team with 78 tackles.

Seth collected many honors during his stellar career at AHS including Boston Globe & Boston Herald All Scholastic, Sun Chronicle & Pawtucket Times First Team along with EAC All Star.  Upon graduation Seth was awarded a football scholarship by Assumption College.

Trackback https://www.attleboroareafootballhof.com/hof/682/c65/trackback
Up Down Print
?