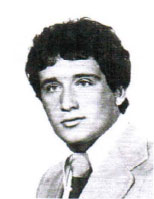 Frank Luongo was one of the spiritual leaders of the outstanding Bishop Feehan squads of the middle 70s. A quick, hard-hitting guard and linebacker for two seasons, he has been described as one of the most reliable members of a team that included many standouts, including Hall of Famer Hank McOeed. Coach Paul OBoy, in fact, coupled Luongo and McOeed in a comment about the value of linebackers, declaring, "You 're only as strong defensively as your linebackers. Those two (Luongo and McDeed) knew exactly what to do without hurting what others were trying to accomplish ." Frank keyed the defense in Feehan's 12-0 win over Attleboro in 1974 and recovered a fumble in the Shamrock shutout of Wareham during the same month. Led by Luongo, Feehan limited Attleboro to 15 yards in the second half of a rainswept victory in October of 1975, and on two occasions was awarded five stars by the coaching staff for outstanding efforts at critical points in those games. So impressive was his effort in his final game against Stang in '75, that he was awarded the Balfour Trophy as the contest's outstanding performer - an honor his brother Peter also captured in 1983.

Luongo, Peter 2012.10.07by
Trackback https://www.attleboroareafootballhof.com/hof/2792/b5f/trackback
Sign In?
Designed by hikaru100