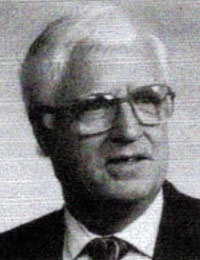 Tradition and community support are two of the cornerstones of Red Rocketeer Football. Over the years tbe townspeople have supported the football program in various ways, all of whkh have brought the athletes and citizens of the town a little bit closer together.

Roy Lockwood has supported the athletes and especially the football program, for more than 40 years. Back in the early '50's, 1952 to be exact, Roy started a tradition that lasted more than twenty years. This is how it started.

Many of the players on the North football squad were regulars at Roy's barber shop. ln I 952 the team had to travel to Newburyport to take on what most considered a very powerful opponent. North wasn't given much of a chance to win. The Newburyport team must have had the same feeling about the game, and maybe they were a little over confident. The result was a decisive North victory. The Newburyport coach was so upset with the loss that he gave his team's post game refreshments, cartons of ice cold mille, to the North squad. When the players returned home they told Roy the story about the mille and how much they enjoyed it after a tough game. This was all Roy had to hear. Every varsity football game thereafter, until the mid '70's, there was always milk or some other form of refreshment in the locker room after the game compliments of Roy Lockwood. So for all the former Rocketeers sitting here tonight, that played during that era, "Now you know the rest of the story."

Roy also served as chairman of the Fisher-Kelley Banquet Committee for several years. The banquet honors the athletes at North High. He has continued his support of the athletic programs to this day. Roy's son Scott has continued the Lockwood connection to North athletics. Scott has coached in the system for several years, and is still an important part of the program.

Trackback https://www.attleboroareafootballhof.com/hof/2621/714/trackback
Up Down Print
?