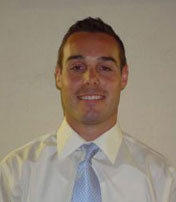 Coach Ray Beaupre described him this way, “He’s as good as any receiver that we’ve had since Mike Redding.”  He was talking about Steve Martelli. The 5’10” 165 pound Martelli was a mainstay on both sides of the football for the Red Rocketeers during the 1991 and 1992 football seasons. Offensively he was a tough kid who could catch the ball in traffic. Defensively his speed and quickness made him one of the best defensive backs in the Hockomock League. Steve played an important role in his team’s 19 win and 2 loss record during his two seasons as a starter.

As a junior Martelli caught 12 passes for 254 yards and 4 touchdowns. Defensively he had 21 tackles 9 assists and 4 pass interceptions. He scored his first career T.D. in a 30-7 win at King Philip on a 14 yard strike from Hall of Famer Brian Sankey. In a 52-6 Thanksgiving Day win he caught two more touchdown passes from Sankey,and in a hard fought 20-0 win over Franklin, Steve had a big second half interception which set up North’s final score and sealed the victory.

Martelli was a captain of the 1991 Big Red team that went 10-1 and scored 344 points. During one four week span Steve was spectacular. In a 51-0 win over Sharon he caught two touchdown passes and returned a punt for a 47 yard score. A week later he caught 4 passes for 103 yards and a touchdown leading his team to a 41-14 victory over Oliver Ames. This was followed by an 8 catch 108 yard performance which included a touchdown in a 49-13 win at Stoughton. Steve finished his four week performance with another T.D. catch and 2 pass interceptions in a 39-7 win over Canton. Despite all of this offense the most memorable play of Steve’s career was a pass interception in the end zone on the last play of the game preserving a hard fought 12-7 win over Mansfield.

At the conclusion of his high school football career Steve Martelli was recognized for his fine performance on the gridiron by being selected to both the Hockomock and Sun-Chronicle All-Star teams.

Trackback https://www.attleboroareafootballhof.com/hof/1952/e10/trackback
Up Down Print
?