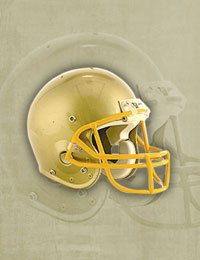 The ultimate triple threat, Glenn Lindstrom was the catalyst on two of the most productive teams in Shamrock football history. The youngest of three hard nosed brothers to wear the Green and Gold of Bishop Feehan, Glenn was the architect of the wishbone offense as its quarterback. As a junior, he ran for 92 yards and passed for 89 more in 26-14 victory over Dartmouth. That same year he scored a TD, ran for a conversion, and threw for two more in a 36-12 romp over Somerset. As a captain in his senior year, Lindstrom was immense in a shocking 18-14 victory over North Attleboro where he ran for two TD's and passed for another. Not only was he a force offensively, but also played a steady defensive back where he made key tackles and picked off timely interceptions. Finally, Glenn was an outstanding placekicker who booted 12 PAT's in his senior year. This, combined with his 7 rushing TD's and 8 TD passes, made him the ultimate weapon for the opposition to stop. As one sportswriter asked in his weekly column "Where would Bishop Feehan football be without Glenn Lindstrom ... who seemingly is on the field every minute." Lindstrom completed his outstanding career with a 2 TD, 155 total yards effort in a 21-6 victory over Coyle on Thanksgiving. For this performance he was awarded the Balfour trophy as the game's MVP. After high school Glenn went on to play football at Stonehill College where he was an outstanding receiver. The same sense of self discipline and commitment he displayed as an athlete carried over to his present career. Today, he is a captain in the Marine Corps and flies helicopters out of North Carolina.

Trackback https://www.attleboroareafootballhof.com/hof/1969/f6e/trackback
Up Down Print
?