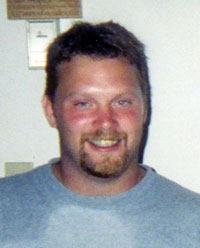 Attleboro High School enjoyed some of their greatest success during John Lallier’s three contributing seasons on the gridiron.  The quick and agile Lallier played three years on the offensive line and two years on the defensive line for the Blue & White,  when he was not making the key block or tackle on special teams.  Lallier’s preparation, effort and determination, whether at practice or on game day, earned him the respect of his coaches and teammates!  The attacking and physical style that Lallier played opened up gaping holes for the boys in Blue & White to exploit.  During Lallier’s tenure at right tackle the Big Blue’s offense averaged just under 32pts per game, had  three running backs rush for over 1000 yards, two quarterbacks throw for over 800 yards, and two receivers accumulate almost 500 yards in receiving!

As a sophomore Lallier helped the Blue Bombardiers take home the Attleboro Elk’s Trophy by opening up holes for Hall of Famers David Menard, Jesus Duran and Dan Warchol, who rushed for combined 280 yards on their way to defeating Bishop Feehan 27-0.  As a junior, Lallier and his Bombardier teammates had a tremendous season at 9-1.  The highlight of his junior year came on Thanksgiving Day when Attleboro overpowered North Attleboro 22-8.  “John’s a very sound player, our big-play man on defense” head coach Cliff Sherman stated.  Sherman also added “for a big kid, he’s got great quickness and agility, and he’s the kind of kid we could move around to different spots where we needed him.”

The powerful and gritty Lallier came to play on Thanksgiving Day 1995, as the Bombardiers fell to the North 27-23 in a game many consider one of the greatest games ever played in the long storied history between North & Attleboro.  Although Attleboro came up short on the scoreboard, Lallier was still honored for his play with the L.G. Balfour Trophy as the game’s defensive MVP.

For his outstanding performance during his senior year, John Lallier was an All EAC selection and Sun Chronicle All-Star.

Trackback https://www.attleboroareafootballhof.com/hof/735/8b1/trackback
Up Down Print
?