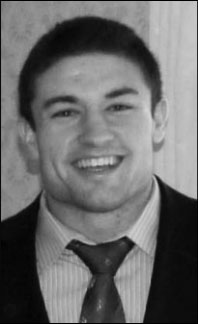 Nathan Kuffrey, Class of 2008, wore the Blue & White with pride and determination. Kuffrey was the ultimate lead-by-example pl ayer, fierce- ly leading his team at practice and on game day. Nate first found the field as a sophomore and learned to respect his opponent and the game. The weak-side backer recalls being part of a “huge collision” while making a tackle that resulted in the loss of his own helmet , and he knew right then that he had to “hit the weight room” to prepare for his remaining AHS tenure. The Attleboro football community real ized the results of Kuffrey’s hard work and off-season efforts.

The 5’-8“ 170 pound Kuffrey played all special teams, offense (RB) and defense (LB) during three varsity seasons, as Head Coac h Kevin Deschense and the Bombardier coaching staff wanted their talented leader on the field at all times. Running the wing T-formati on Nate was a versatile running back who could block, rush for tough yards and catch the ball out of the back field while sharing the workl oad with Chris Palermo, Luke Johnson and Jono Graziosi. Kuffrey contributed nearly (700) total yards of offense during his junior and senior seasons and Deschenes noted, “it takes four guys to bring him down, he keeps going forward and he wrecks havoc” when taking on defensive li neman and linebackers to create space for his fellow ball carriers.

The hard hitting Kuffrey was a defensive force for the Bombardier 4-4 scheme for his outside linebacker perch, finishing his wi th career with 223 tackles (134 unassisted), four sacks, 1 fumble recovery and 2 interceptions. Deschenes touted the defensive exploits of Ku ffrey stating, “Nathan’s ability to read an offensive play from his outside linebacker position made him one of the best players verse the ru n and pass”, resulting in Nate leading the team in tackles in senior year with (99).

For his outstanding play, Nate Kuffrey was selected to league all star teams , Sun Chronicle All Star teams and he received the AHS Defensive Player of the year his junior season. Nate’s commitment and loyalty to the Attleboro High football program resulted in being awarded the prestigious Bill Marcoccio Bombardier Award at the conclusion of his senior season, and he then went onto play football for the Greyhounds at Assumption College

Trackback https://www.attleboroareafootballhof.com/hof/4557/f4f/trackback
Up Down Print
?