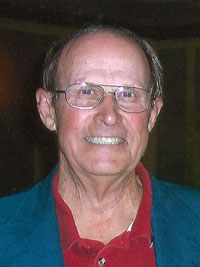 Although he did not attend North Attleboro High School or ever play a down of football wearing the Red & White, one would be hard pressed to find anyone over the past 30 years who has volunteered more of his free time to the Red Rocketeer football program in a non-coaching capacity than Bud Holden.

To those outside the program, Bud is best known as the voice of Big Red football through his role as public address announcer at both Community Field and Beaupre Field for the past 27 straight seasons. That alone is worthy of recognition here tonight; however, his contributions to North football go far beyond his time spent behind the microphone on game day. As a loyal supporter behind the scenes, Bud has donated his time, money, and expertise in so many ways to enhance the football experience for players and coaches alike. As a member of the Chain Gang from 1981-1983, Bud watched his son John ('84) battle along the offensive line for Big Red, while off the field he assisted with the establishment of the Monday Night Gridiron Club, helping write the organization's original by-laws and also serving as its President.

Bud Holden's actions come from the heart. He has never been one to seek credit for his efforts or attention for his kindness. Very few people are aware that it has been common for Bud to provide assistance in an anonymous manner, be it in the form of providing the drinks for all who attend the annual senior supper, or more substantial support financially to help offset costs associated with super bowl rings.

To Bud his involvement with Rocketeer football over the past three decades has provided him with so many thrills. He was able to watch from field level as his son, John, played his final game on Thanksgiving in 1983, and years later he has enjoyed watching from the press box as his grandsons Barrett ('10) and current Rocketeer Reid ('13) suited up for North High. Bud felt a special pride getting to call their names for the first time. In addition, he has formed friendships with players, their families, coaches, and athletic directors that will last a lifetime.

Etched in his memory forever will be countless great plays, big games, and emotional moments such as victories over Mansfield and Attleboro in 2009 following the untimely loss of former Rocketeer Kyle VanDeGiesen, and this year's electrifying overtime victory over Stoughton when the crowd swarmed the field after the winning score.

The Rocketeer family has been blessed to have numerous, faithful followers for the better part of nine decades. Bud Holden stands as a shining example of the many selfless individuals who have devoted years of their lives to help support the traditions associated with Big Red football so that new generations of student –athletes could enjoy the experience year after year.

Trackback https://www.attleboroareafootballhof.com/hof/589/076/trackback
Up Down Print
?