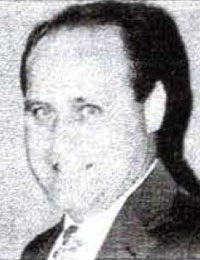 Although small in stature as quarterbacks go, Carl Hebert possessed a strong and accurate throwing arm. Hebert was the Red Rocketeers starting quarterback during the seasons of 1975 and 1977, and Co-Captained the 1977 team.

During his sophomore year. Hebert was thrown right into the fire replacing injured Hall of Farmer Mike Kummer. Carl's first game was a real test against a good Mansfield team. He came through with flying colors leading his team to a close 13- 12 victory. He completed 6 of 14 passes for 109 yards and one touchdown.

As a starter in 1976, Carl had an outstanding game against Mansfield completing 10 of 27 passes. Two of those were for touchdowns, leading North to a stunning 21 - 20 upset of previously undefeated Mansfield. That same year Hebert threw touchdown passes of 18 and 85 yards to Mike Redding to lead North to a 13 - 7 victory over Attleboro.

During his two years as a starter Carl completed 145 passes in 311 attempts for 20 touchdowns.

Trackback https://www.attleboroareafootballhof.com/hof/3381/574/trackback
Up Down Print
?