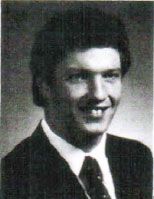 One of Feehan's finest all-time scholar athletes, Bill Hyland earned 11 letters during a splendid athletic career, breaking into the starting lineups of the Shamrock baseball and hockey teams as a freshman, and beginning a string of 30 consecutive starts as a football player as a sophomore. A 5' 11 ", 150-pound defensive back and wide receiver, Bill won regional honors for his outstanding performances, particularly as a pass receiver. Typical was his heroic effort in a comeback Feehan victory over Case in his junior year. With his team down by four points with two minutes remaining, Bill caught five straight passes, the last for the winning touchdown. As a senior, he set a standard for Feehan ends, hauling in 51 passes for 890 yards and nine touchdowns - school records to this day. Against North Attleboro, he hauled in five tosses for a total of 115 yards and the winning touchdown, and against another archrival, Attleboro, he nailed five passes for 78 yards and a pair of touchdowns. And in his final game, he caught two touchdown passes and returned a punt 52 yards in one of his best performances. Keenly intelligent, he won Feehan's coveted scholar-athlete award while finishing second academically in a class of 230. Bill went on to study and play ball at Harvard. And if his football exploits weren't enough. he was equally outstanding as a Shamrock hockey and baseball player.

Trackback https://www.attleboroareafootballhof.com/hof/2796/0b1/trackback
Up Down Print
?