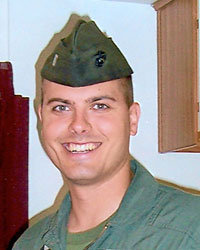 Kyle VanDeGiesen had the size, the intelligence and the athletic ability to be a real good high school quarterback, and he didn’t disappoint. The 6’3” 180 pound VanDeGiesen developed into one of North’s best at that position. His arm strength and foot speed made it very difficult for opposing defenses to contain North’s offense.

As a junior Kyle’s first varsity start was against Massachusetts Division I powerhouse Xaverian. In a thrilling 29-28 North win VanDeGiesen completed 10 of 16 passes for 175 yards and two touchdowns, one of which was a 77 yard strike to fellow Hall of Famer Chris Rushlow. On Thanksgiving day Kyle completed 10 of 15 passes for a 112 yards and 2 more touchdowns, leading the Rocketeers to a 36-0 win over Super Bowl bound Attleboro. Kyle guided his team to a fine 9-2 record, completing 66 of 138 passes for 1,017 yards and 8 touchdowns.

As a senior VanDeGiesen was as good as any quarterback in the state. He led the Rocketeers to a terrific 11-1 record and a Division 3 Super Bowl Championship while completing 72 of 121 passes for 16 touchdowns. In a 37-8 victory over Oliver Ames Kyle completed his first 10 passes, and finished the game completing 12 of 15, three of them for touchdowns. In a 31-7 trouncing of undefeated Foxboro he ran for 49 yards and threw for 71 more. He completed his North High career with a 14-0 win over a tough Attleboro team and an impressive 20-14 Super Bowl win over Swampscott.

At the conclusion of the 1998 season VanDeGiesen was recognized for his gridiron accomplishments. He was chosen as a Boston Globe All-Scholastic, a Boston Herald All-Star, The Hockomock League's Offensive M.V.P., a Sun-Chronicle All-Star and North’s offensive M.V.P. Kyle is currently a First Lieutenant in the United States Marines flying Super Cobra helicopters.

Trackback https://www.attleboroareafootballhof.com/hof/767/0da/trackback
Up Down Print
?