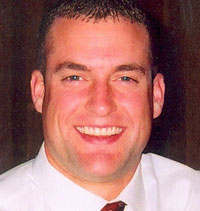 Coming off an undefeated 1995 season, questions abound as to how North Attleboro was going to defend its Hockomock League title entering the ’96 campaign.  While the skilled players were lacking experience, North’s line was even stronger than the year before.  With the likes of 6’3” Mike Tryon at defensive tackle alongside Hall of Fame defensive ends Dave Reed and Chris Schlick, it quickly became apparent who would lead the Rocketeers.

In a thrilling opening game against Division I power Xaverian, Tryon had one sack and several key tackles as North secured a 29-28 victory in the game’s final minute.  Against a tough Oliver Ames squad three weeks later, Mike again rose to the occasion with another big sack in a hard-fought defensive battle, helping hold the Tigers to just 125 yards total offense in a 14-2 win.

Clearly the defensive front four was a major source of consistency throughout the season, with Head Coach Ray Beaupre calling it “the strength of our team”.  The defense’s 128 points allowed was the 2nd fewest total in the Hockomock League, and just a single point, 14-13 loss to Mansfield in late November separated the Big Red from claiming back to back league titles.

Noted Beaupre about Tryon, “He has all the physical abilities to be dominant, excellent quickness, and speed on defense.  And offensively his play at tight-end is one reason we ran so well on Thanksgiving.”  In that game Tryon earned the game’s Defensive MVP honors as the Rocketeers’ stingy defense held the super bowl-bound Bombadiers to just 73 yards net offense in a 36-0 victory – the final game of Beaupre’s illustrious 21-year career at the helm.

Over 2 seasons Tryon had a hand in 72 tackles, 4 fumble recoveries, and a team high 4 sacks to help lead Big Red to 19 wins in 21 games, and at the conclusion of his senior year Mike was selected to both The Sun Chronicle and Hockomock League All Star Teams.

Trackback https://www.attleboroareafootballhof.com/hof/692/f26/trackback
Up Down Print
?