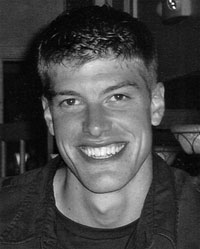 With all the talent, the size, the skill set, and the intelligence equal to that of his heroic hall-of-fame brother Kyle, Ryan VanDeGiesen took the reins of the offense in North Attleboro in 2002 and quickly proved himself as an outstanding quarterback and leader for the Rocketeers.

During his junior season in 2002 Ryan completed 45 of 96 pass attempts for 742 yards and 9 touchdowns for an offense that totaled an impressive 319 points on the season. In his senior season in 2003 Ryan emerged as one of the best quarterbacks in the state, completing 66 of 122 passes for 1,287 yards, 13 touchdowns and only 4 interceptions. At 6'-3", 160 Lbs. Ryan also proved his athleticism as the teams 2nd leading rusher with 72 carries for 343 yards.

In one of the most memorable offensive showdown in Massachusetts High School Football History, Ryan and the Big Red defeated Swampscott 44-40 to earn their 7th Eastern Mass State Championship. He completed 6 of 9 passes for 82 yards, 1 touchdown, and 2 two-point conversions. On a crucial 4th down and 12, while losing 40-36 with less than five minutes remaining in the game, Ryan scrambled and lost his shoe. He managed to escape a sack, and completed the pass over the middle for 17 yards and a first down. His outstanding effort and poise set up North Attleboro’s game winning score and two-point conversion.

In a local shootout against Bishop Feehan in 2003, Ryan led the Rocketeers to 445 yards of total offense en route to a thrilling 29-27 victory. Ryan completed 9 of 14 passes for 295 yards and 3 touchdowns, including a season-long 84-yard TD pass.

Ryan was named to the Hockomock League All-Star Team in 2002 and 2003, and Sun Chronicle and Boston Herald All-Star Teams in 2003. Ryan received the Balfour Trophy as the Offensive MVP against Attleboro in the 2003 Thanksgiving Day Game, and was voted North Attleboro’s Offensive MVP for his senior season. In 2003 Ryan was named Hockomock League Offensive MVP, and was also selected to play in the annual Massachusetts Shriner’s Classic Game where he was the game’s Offensive Most Valuable Player. Ryan was later awarded the Attleboro Area Football Hall of Fame Scholarship.

Ryan continued his gridiron success at Curry College where he currently holds 9 all-time passing records including single season and career passing yards, attempts, completions, and touchdowns, along with the single game touchdown record. Ryan completed 505 of 975 passes for 7,041 yards and 76 touchdowns , and he also ran the ball for 1,171 yards and 22 touchdowns.

Trackback https://www.attleboroareafootballhof.com/hof/623/258/trackback
Up Down Print
?