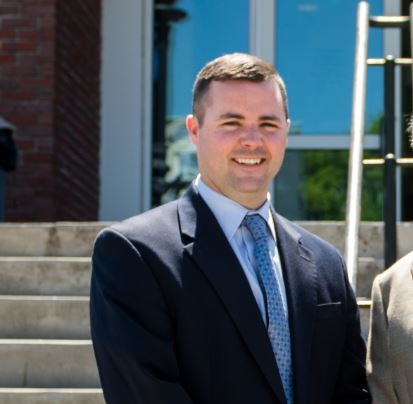 Smart, tough and versatile are a few words then Head Coach Paul Sullivan used to describe him. Those qualities, in addition to his willingness to lead with both words and actions, were recognized by his teammates when they selected him as a captain of the 2003 Big Red squad. The first test of his versatility and intelligence came quickly as a sophomore versus Canton. The Rocketeers had four quarterbacks on their roster, he was not one of them. Due to injuries, Big Red was down to one quarterback. Although he had never taken a snap, Pat was pulled aside at halftime with a simple question: “Can you do this?” The result was a flawless second half in his only stint behind center.

As a junior safety, Pat helped anchor a stingy defense in a season that culminated with his greatest memory: a wild shoot-out with Swampscott on a bone-chilling December night. This Super Bowl featured two high powered offenses that seemed unstoppable: Swampscott in the air and the Rocketeers on the ground. The team with the most possessions would have the upper hand and turnovers would be crucial. Always considered a student of the game and films, Pat brought that attention to detail into focus when he jumped a shallow crossing route by a Swampscott receiver making a critical interception that enabled North to establish an early lead in this game for the ages. Big Red would go on to win the championship 44-40.

Pat’s final season was a showcase of his toughness. After a successful junior year in the secondary, he switched to strong side linebacker. His play there exemplified his “Just do your job” attitude. In speaking with his head coach, one particular game stands out: “The game that left the most indelible mark on our coaching staff's mind was a game versus Foxboro. They were big, physical, and committed to running the football. Their toss sweep, led by large pulling linemen, had dominated opposing defenses. To stop them, someone had to be assigned the dirty and difficult job of "setting the edge". The assignment went to our strong side outside linebacker, Pat Sullivan. Throughout the day wave after wave of Foxboro linemen pulled to the edge searching for that soft spot to pour their tailback through. One player determined that on this day it was not going to happen. Alert to his defensive keys he threw himself into the breach play after play where he met the oncoming wave of blockers on their side of the ball. He not only "set the edge" for the defense, he shrunk it creating a train wreck in the backfield that allowed a swarming North defense to take away an imposing Foxboro run game.

Pat finished his career with 72 tackles, 27 assists, two quarterback sacks, and a fumble recovery. Though used primarily as a blocking back for Hall of Famers Marcus Vaughn and Tim Bartucca, his offensive contributions didn’t go unnoticed. He was the only player to cross the goal line in North’s hard fought 14-0 victory over a tough King Philip team. He took in a long pass from fellow Hall of famer, Ryan Van De Giesen, streaking 60 yards down the sideline to put North ahead 7-0. Then he reversed roles by using blocks from Bartucca and Vaughn to score on a 4th and goal to secure the victory. For his efforts, he was selected as a Sun Chronicle All-Star. His proudest accomplishment is being recognized as North Attleboro’s Raymond E. Beaupre L.T.D. award winner. This award recognizes the player who best demonstrates the qualities necessary to be successful in the North Attleboro football program: Loyalty, Toughness and Discipline.

After high school, Pat went on to earn his BS at UMASS Amherst then Juris Doctor at New England Law. He is currently an owner/partner at Lewis & Sullivan, PC in Attleboro. True to his roots and love of this area, he also sits on the board for the Attleboro Land Trust and spends his free time enjoying the local outdoors.

Trackback https://www.attleboroareafootballhof.com/hof/4974/917/trackback
Up Down Print
?