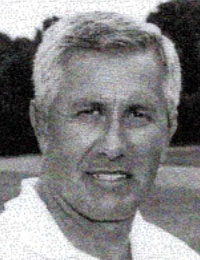 The embodiment of the name, "Coach", Tom Crowe was actively involved in high school and college football for over thirty years. A graduate of Case High School in Swansea where he played for Jim Cassidy, Tom went on to star in football and track at Boston University. A technician in the true sense of the word, Tom influenced the lives of thousands of athletes both on and off the field. While teaching physical education in the Attleboro school system for over three decades, he has compiled an impressive resume of coaching experiences. Locally, he is best know for having served as both assistant coach and head coach at Attleboro and Bishop Feehan High Schools. The trademark of his teams were highly disciplined and hard working squads who were extremely well drilled and conditioned. Prior to these positions, he was an assistant at Oliver Ames and Head Football Coach at St. Raphael's Academy in Pawtucket. He served as Defensive Coordinator at both Worcester Polytechnical Institute and Brown University in between his stints at Attleboro and Feehan. A gentleman in every way, Tom taught his athletes how to act with dignity and class in victory and defeat. So great is the esteem in which he is held by former athletes that years later these grown men will still refer to him as "Coach Crowe."

Trackback https://www.attleboroareafootballhof.com/hof/2619/efe/trackback
Up Down Print
?