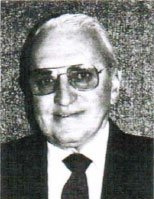 Bucky Gay, veteran official at the L.G . Balfour Company, has been in the middle of things since the Football Hall of Fame was founded 17 years ago. One of the founding fathers. Bucky served as chairman for the first five (5) years and was instrumental in lending the program its style. Bucky first became active on the Attleboro football scene as an official with the pre-teen league. where he remained deeply involved for seven (7) years. In addition to his ongoing involvement with the banquet committee. Bucky ably represents his employer as the presenter of Balfour trophies at the Attleboro-North games on Thanksgiving Day. The very personification of active and responsible interest in schoolboy sports. Bucky is a most welcome addition to the ranks of the hall's honorary membership.

Trackback https://www.attleboroareafootballhof.com/hof/2597/790/trackback
Up Down Print
?