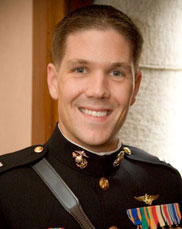 Possessing a lethal combination of quickness, strength, and football savvy, Ryan Cherry dominated the trenches for three seasons as an offensive lineman for the Bishop Feehan Shamrocks.  Perhaps not coincidentally, Cherry’s time on encompassed some of the most successful years in the storied history of the program.

As a sophomore in 1993 starting for new head coach Matt Lanagan, Cherry found himself opening holes for running back Tony Chang and protecting quarterback Nate Cote, both future Hall of Famers themselves.  The Shamrocks, with a nucleus of mostly sophomores and juniors on both sides of the ball, overcame an 0-3 start by rattling off seven straight victories to close the season, punctuated by a Thanksgiving Day victory over rival Coyle-Cassidy.  In Cherry’s junior year, those sophomores and juniors became upperclassmen, and Feehan rolled off its first undefeated regular season in almost 30 years.  Cherry’s muscle and impeccable blocking technique powered the Shamrocks’ potent offensive attack, which featured running backs Mike Cassidy and Noah Sheridan as well as Hall of Famers John Fitzsimmons, quarterback Brett Poirier, and wide receiver Tom Morin.  The Feehan offensive backs rambled through wide holes opened by Cherry and his linemates as they plowed through opposing defenses in signature victories over North Attleboro, Attleboro, Durfee, Bishop Stang, and Coyle-Cassidy en route to a 10-0 regular season and the school’s first-ever Super Bowl berth.

With Cherry serving as team captain as a senior, the Feehan offense continued to pile up yards and points.  Fitzsimmons rushed for 1,217 yards and 25 touchdowns on the season, largely behind a senior-dominated offensive line anchored by Cherry and classmates Brian McLaughlin, Bill Servant, Ryan McGowan, and tight end Nathan Cesarz.  The Shamrocks ran off six straight wins to finish the season at 7-3, and  co-champions of the Eastern Athletic Conference.  For his efforts, Cherry earned Coach Lanagan’s “Hammer Hit” award three times, was named to the All-Sun Chronicle team, and was awarded the Roche Brothers Player of the Game award.  Cherry says he will always remember grueling Tuesday practices pushing the “7-man sled” with long-time Feehan offensive line coach Paul O’Boy, warming up with “Shamrock Jacks,” and, of course, singing Lanagan’s signature victory song “Yellow Bird” after wins.

Ryan Cherry went on to play college football at , where he was named Scholastic All-Conference and earned a Bachelor of Science degree.  He is currently a Captain in the United States Marine Corps, where he flies AH-1W Cobra helicopters.  Captain Cherry lives and works in the area and has served his country during four combat deployments in .

Trackback https://www.attleboroareafootballhof.com/hof/637/db7/trackback
Up Down Print
?