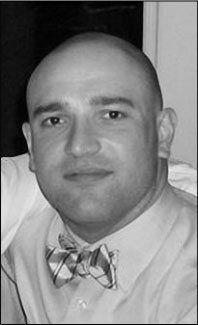 When asked, several teammates recall Andrew Emerson’s play as a two-way offensive tackle and defensive lineman simply with one word: Tenacious. Emerson, a quick, agile and athletic lineman for his size, anchored a veteran offensive line that included Kevin Gay , Jeff Ethier, Chris Allen, and Dan Saganey. Behind this front five, Bishop Feehan churned out a 1,000 yard passer and a 1,000 yard rusher in fellow Hall of Famers Jim Petrillo and Scott Connolly, as they sprinted to the 2000 EAC crown.

It was Emerson’s desire to dig deep and beat his man on every play that helped power Feehan’s offensive juggernaut in his senio r cam- paign, an offense that scored more than 50 points 3 times. In the season opener, Feehan rushed for 4 TDs against St. Bernard’s, then turned in a punishing rushing performance against Dartmouth, and gained for over 250 yards on the ground against Bishop Stang. In a sh owdown with Attleboro for the league championship, Emerson’s offensive line executed flawlessly and was the catalyst for Feehan’s 5 scores in the 2nd quar- ter and 2 scores to open the 3rd. Feehan routed Attleboro 54-14, rolled to a 7-2-1 record and secured a birth in the Super Bowl .

Emerson also shined on the defensive side of the ball during that same season, part of a foursome of down lineman who shut out St. Bernard’s and Durfee, held Dartmouth and Bishop Stang to 8 and 7 points, respectively, and held Attleboro, Somerset, and BC Hig h to 14 points or less.

Perhaps the best way to celebrate his career is not with statistics of points scored, yardage racked up, or shutouts posted, bu t with an anec- dote that speaks to the heart with which Andrew Emerson played football. Prior to their contest with Catholic conference power BC High, the Feehan offense had many discussions on how to handle Tim Bulman. Bulman was BC High’s monstrous defensive tackle who later play ed at Boston College and the Houston Texans. During practice that week, Feehan schemed to slide their protection to his side and run more of a 3 - step passing game to get rid of the ball quickly. They also planned to run away from Bulman in an effort to neutralize him. Mid week however, Petrillo remembers Emerson turning to the coaching staff and stating confidently, “I got this coach. I can handle him by myself , I don’t need any help.” True to his word, Emerson delivered one of the best offensive performances of the season. With impeccable technique and desire, he manhandled and frustrated Bulman all day. At no time did he pressure Petrillo and despite giving away nearly 75 pounds to the f uture NFLer, Emerson held him to only 2 tackles.

Recognized for his efforts all season long in the trenches, Emerson was named all EAC and a Sun Chronicle All-star. After gradu ating from Bishop Feehan, Emerson played football at Bentley University