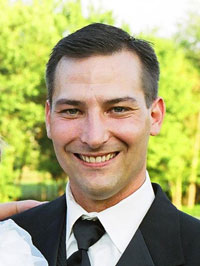 As a 6’, 180lb halfback Dan Feid was an explosive runner and a potential touchdown every time he touched the ball.  In North Attleboro’s potent Wing-T offense, opposing teams had to be so concerned with Dan’s speed to the outside they were forced to spread their defenses horizontally, which made North’s inside game even more effective behind fellow Hall of Fame running backs Pat Bannon and Brian Droney.

Earning the start in his first game as a sophomore against a strong Dartmouth team in 1991, Dan scored one TD and rushed for 147 yards, including a 48-yard burst that was “the highlight of a sensational debut for Feid” according to The Sun Chronicle.  That game was just the beginning of many Feid highlights over the next three seasons.

In a 40-9 victory over Attleboro at the end of the ’91 season, Dan twice dazzled the crowd by running right and then cutting left to score touchdowns. In the opening game of 1992 he rushed for 91 yards and 3 TDs to help the Rocketeers defeat Bishop Feehan 42-16.  During a 1993 non-league victory over Catholic Memorial, Dan scored on a 61-yard inside reverse just two plays into the game, and then broke the game open with an electrifying 88-yard kickoff return for another TD.

Dan’s senior season ended in dramatic fashion for North Attleboro, and he simply rose to the occasion in the final two games.  In a 47-29 victory over a solid 7-2 Attleboro squad Dan had 133 total yards of offense and 3 touchdowns.  Just days later he capped the year with 3 more TDs and 170 total yards of offense in the Rocketeers 42-7 Division 3A Super Bowl victory over Whitman-Hanson.  It was the Big Red’s first Super Bowl title since 1974, and it capped an 11-0 season that included the Hockomock League Championship.

Dan’s unique combination of size and speed helped him accumulate impressive overall career statistics which included 1,720 All-Purpose Yards, 25 Touchdowns, and 152 Points Scored.  In his spare time he also punted 20 times for a 38 yard average to help earn him Sun Chronicle and Hockomock League All Star honors in his senior year.

Trackback https://www.attleboroareafootballhof.com/hof/723/284/trackback
Up Down Print
?