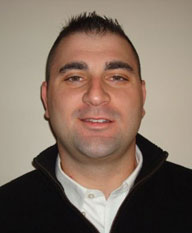 The fall of 1995 held out much promise in Big Red Country with the return of future Hall of Fame running backs Brian Droney, Mark DiBiasio, and Chris Rushlow.  However, lacking experience in the offensive line the North Attleboro coaching staff was forced to mine for talent among their underclassmen.  One of the gems uncovered was a talented sophomore named Joe Di George.

At 6'2" and 225 lbs., Joe possessed the required size and strength to create the operating space needed for these talented backs.  His physical gifts were surpassed by his deep appreciation of fundamentals and a work ethic that served as a model for teammates.  His unique combination of strength, speed, and intelligence afforded the North Attleboro staff the flexibility of calling for power plays directly at him as a tackle or choosing to pull him away on sweeps and counters as a guard.

These skills were never better exhibited than in a furious comeback against Franklin in 1995.  Down by three scores in the second half, North fought back to within 6 points of the lead.  On their final drive, late in the fourth quarter and deep into Franklin territory the call was made, “Droney…counter left”.  Di George pulled from his right tackle position to his left sweeping through the trap hole searching for leaks.  He first secured the right flank of the hole by chipping away a probing defensive tackle.  Then, while leaping over stray legs in the hole, he spied an outside linebacker closing in from his left.  He cut quickly to his left, and in perfect form, dropped the defender to the ground.  Droney followed close behind bursting into the endzone thus securing one of North Attleboro’s greatest comebacks.

Joe encountered significant hardship in his junior and senior seasons.  Midway through his junior season he broke his ankle versus Canton.  Once again in his senior year misfortune came calling.  During a victory over Mansfield that propelled his team toward a league championship, Joe tore three major ligaments in his knee.  Once again facing season ending reconstructive surgery, Joe elected to rehab the supporting muscles, brace the knee, and play through the considerable pain.  In what Coach Sullivan termed an “incredible display of will”, Joe returned to lead his team to a Thanksgiving Day win along with a Super Bowl victory over Swampscott.  As a result of his demonstrated resolve in the face of adversity, Joe was cited by the Massachusetts State Coaches Association as the “Courageous Player of the Year” in Massachusetts for 1997.

Ever the team player, no bio of Joe would be complete without the inclusion of his teams’ accomplishments during his three years as a starting offensive lineman.  Joe’s teams were a combined 30 and 4, including two undefeated Hockomock League championships and one Super Bowl victory.

Trackback https://www.attleboroareafootballhof.com/hof/649/282/trackback
Up Down Print
?