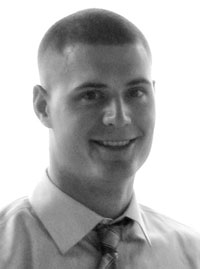 “He runs well, he catches the ball well, he blocks well. He has all the ingredients for an outstanding tight end”, said Coach Paul Sullivan of Kyle Edwards. Kyle’s size, strength, and consistent hard work ethic made him one of the most feared tight ends and defensive ends in North Attleboro history. Kyle was described by local sportswriters as being “a towering target at tight end and an effective defender with his wingspan.” At 6'-6" Kyle proved himself to be a force on the offensive and defensive lines for North Attleboro in the 2000 and 2001 seasons.

During his junior season in 2000 Kyle led the team in receiving with 17 receptions for 363 yards and 4 touchdowns. During that season Kyle recalls playing Bishop Feehan in his first varsity game as a starter. In the midst of one of the longest winning streaks in Massachusetts high school football history, North Attleboro battled Bishop Feehan to the final seconds of the game when the Rocketeers ended it with a game-winning field goal. Against top-ranked Foxboro during the same season, fans packed North Attleboro’s Community Field in anticipation of a huge Hockomock League face-off. Kyle’s memorable final TD catch of the game wasn’t enough for the Rocketeers as they lost the game, and realized the end of their incredible 38 game winning streak had come.

In his senior season in 2001 Kyle anchored a North defense that gave up only 84 points. In another tough Hockomock League matchup against Mansfield, a three-way tie for the league title was at stake. North led late in the 4th quarter as Kyle’s third quarterback sack of the game forced a fumble, allowing the Rocketeers to run out the clock and secure the victory and a share of the Hockomock League title. In the annual Thanksgiving Day game Kyle had 3 catches for 68 yards in a game that was described in this way by local writers, “The final margin of 33-7 in favor of North Attleboro does not express the superiority, the tenacity, the sense of purposefulness that North Attleboro displayed for four quarters”.

For his efforts on the gridiron, Kyle was selected to the Sun Chronicle All-Star Team in 2000 and 2001, and he was also selected to the Hockomock League All-Star Team in 2001. Kyle was awarded the NAHS Athletic Cup as the Top male athlete in the graduating class of 2002. Upon graduation he accepted a full athletic scholarship to play football at the University of Rhode Island where he was a 4-year varsity starter and 2006 Senior Captain. He was awarded the Elizabeth Holmes Award as the URI Outstanding Male Scholar-Athlete and was an All-Academic Atlantic-10 Conference Selection all four years.

Trackback https://www.attleboroareafootballhof.com/hof/621/b89/trackback
Up Down Print
?