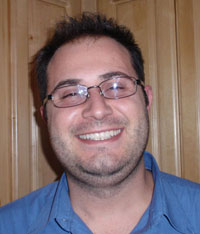 An extremely driven and coachable individual, Jon Cahill was an example of hard work and consistency throughout his career as a Red Rocketeer. His play garnered the following words from Coach Paul Sullivan.
“He was the prototypical North lineman. He was not big by traditional lineman standards but his foundation like many of his predecessors was based on a combination of quickness and power. What truly set him apart from others though was his discipline and mental toughness. Regardless of the scheme being run from his positions as a defensive end or offensive guard, there were three things you could always be certain of... Jon Cahill would be where he was supposed to be... he would be there exactly when he was supposed to be... and he would be there with the needed passion to get the job done right. His name was not often heard over the public address as the scorer of the touchdown or the maker of the tackle, but if something good happened you knew it meant Jon was around the ball. Postgame films would inevitably reveal his constant imprint on the success of the key plays on both sides of the ball. Perhaps the greatest compliment you could give about Jon’s play would be to say that cut-ups of his game film could be used as training film today for young players who want to learn how to play the game right.”

At 6'1", 191 pounds, Jon was a two year starter at both offensive guard and defensive end. During his senior season Jon recorded 26 tackles and recovered 2 fumbles. Jon’s most memorable moment came in the final minutes of the Mansfield game his senior season in 2000. After a late Mansfield score, Jon watched the ensuing onside kick bounce off a teammate in his direction. Jon jumped on the ball and held on for what seemed like an eternity under a pile of Mansfield players all trying to pry the ball loose and gain possession. Jon held on and allowed Big Red to take possession and run out the remainder of the clock for a dramatic hard fought 13-7 victory.

For his outstanding senior season, Jon was selected to the Hockomock League and Sun Chronicle All-Star Teams, Honorable Mention for the Boston Herald All Star Team and was later awarded the Thomas G. Bury Memorial Scholarship Award.

After high school Jon earned a Bachelor of Arts in Business, a Major in Finance, and a Minor in Accounting. Jon currently works as an officer for the State Street Corporation

Trackback https://www.attleboroareafootballhof.com/hof/579/932/trackback
Up Down Print
?