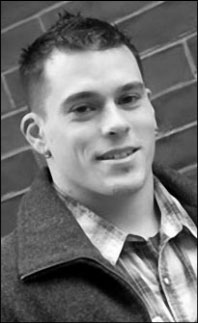 Loyalty, toughness and discipline. As his former coach Paul Sullivan says, “Robbie Dargis had all of the individual characteri stics that are the foundation of the North Attleboro Football Program.”

Rob started at linebacker and running back as a junior and senior. He lead the team in rushing his junior year, boasting 111 c arries for 798 yards and again during his senior year with 639 yards and eight touchdowns, an average of eight yards per carry. Though he never eclipsed the 1,000 yard rushing mark, Rob was a crucial component of a starting backfield that rushed for nearly 2,000 yards and was con sidered by many to be the best rushing team in the state.

If you ask Rob about some of his favorite memories, he won’t mention his 152 yard, three touchdown performance against Franklin , paving the way to a 41 point shutout. He’ll tell you about the Mansfield game. After showing his speed and toughness during the first half of the sea- son, Mansfield spent their time watching his every move. In the end, North would come out on top 24-20. He accounted for a ch unk of North’s yardage that afternoon, but in the “red zone” he proved how much of a threat he was without even touching the football. Each t ime North neared the goal line Mansfield focused on Dargis while he watched one of his teammates score all three touchdowns that day. Sullivan had this to say about him, “He was selfless. There are few players I recall that gave so much of themselves physically to our program while lo oking for noth- ing back but the success of his teammates and his team. It is guys like Robbie that are the glue to great teams."

“He compensated for his lack of size as a linebacker / running back with great quickness and the heart of lion,” Sullivan said. At 5’7’’ and 150 pounds, Rob was not a prototypical linebacker in stature, but he certainly played like one. As a senior he helped anchor a stingy defense that allowed an average of less than 8 ? points per game, including a 21-0 shutout over Foxboro and a memorable Thanksgiving da y victory that saw the Rocketeers limit Attleboro to seven just points, 109 total yards and five first downs. Rob finished his senior se ason as the team’s leading tackler.

Dargis finished his varsity career with 1,565 total yards and 16 touchdowns, averaging 7.8 yards every time he touched the ball . As a senior he was recognized as a Hockomock League, Sun Chronicle, and Boston Globe Division 3 All-Star.

Trackback https://www.attleboroareafootballhof.com/hof/4567/0fe/trackback
Up Down Print
?