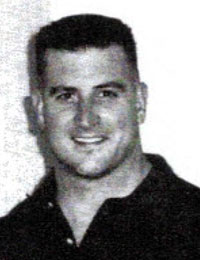 Tim Crosta took over the fullback position for the Red Rocketeers during the 1979 season. He immediately established himself as a tough short yardage runner with break-away speed. During Tim's tenure at fullback, North won 14 of its 20 games and Crosta scored 12 touchdowns. Crosta co-captained the 1980 squad and became a solid two-way performer. Offensively he averaged 5 yards per carry and scored 9 touchdowns. He had a 98 yard run from scrimmage against Sharon, and an outstanding game against Canton in which he made a 61 yard run late in the game to put North ahead. Defensively he was credited with 78 tackles, 44 assists, four fumble recoveries and one interception. Tim was selected to the Hockomock League and Sun Chronicle 's All-Star Teams as a linebacker. He was a Boston Globe All-Scholastic selection and a participant in the Shriners' All-Star Game. After graduation nm attended Harvard where he continued his football career.

Trackback https://www.attleboroareafootballhof.com/hof/3395/52a/trackback
Up Down Print
?