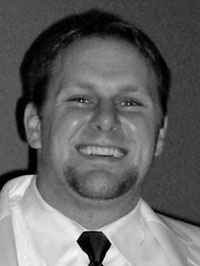 “Mooooose, Moooose”, was often heard bellowing out from the stands and along the sidelines at Big Blue football games from 1996 to 1998, because Matt ‘Moose’ Warchol was making game changing plays. Matt is the youngest of five Warchol kids (sister, Caroline and brothers, former AHS standout Paul, and Hall of Famers, Jamie-’93 and Danny-’95). He always attended Bombardier football games growing up, and dreamt about the day that he would get his chance to “carry on the family legacy.”

In Matt’s first game as a sophomore he made an immediate impact as Attleboro beat defending Eastern Massachusetts Division 1A Super Bowl champion Barnstable, 18-15, on the road. The defensive-minded Warchol forced a fumble on a big fourth down as he tipped the option pitch of Barnstable’s star QB, and the loose ball and victory were secured by AHS. As a junior Moose helped lead the Blue Bombardiers to a 4-1 EAC record. Their lone loss came against cross-town rival and eventual league champion Bishop Feehan in a game in which the sure-handed Warchol had (7) receptions for 117 yards in defeat. Matt averaged more than 16 yards per catch, and had (3) touchdowns of 20 yards or more during his junior campaign.

As a senior, Warchol lead the EAC with 33 receptions for 635 yards and (7) touchdowns! The talent-rich Big Blue team finished that season 8-3 overall, 5-0 in EAC action. AHS crushed their EAC foes, allowing a mere 5.6 points per game (including 3 shutouts) while scoring almost 30 points per game. Defensively, the hardnosed Warchol had (50) solo tackles, while being in on (12) others. Matt also had a fumble recovery and an interception while patrolling the defensive back field. In trouncing New Bedford, 28-6, Moose had a career game. Offensively he hauled in (6) catches for 118 and three touchdowns (4,34, 32 yards) including an outstanding diving grab in the right corner of the end zone, while defensively he made (11) tackles en route to being honored by the Boston Globe as the Division 3 Player of the Week. In Matt’s outstanding three varsity season AHS only had one loss in EAC action, and they had two Division 3 Super Bowl appearances. Clearly the hardworking, intelligent Matt Warchol had great pedigree, but he truly lived up to the high expectations that those in his family set.

For his efforts Warchol was recognized by the EAC and Sun Chronicle as an All Star after his senior season. Warchol is a graduate of UMass Amherst and now is the Program Manager at Lifeworks Inc. in Westwood, working with adults with developmental disabilities.

Trackback https://www.attleboroareafootballhof.com/hof/607/ec8/trackback
Up Down Print
?