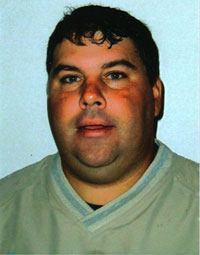 Kevin Candelet was a four year contributor to the varsity football program at Attleboro High School.  As a freshman, Candelet would play the freshman game with his classmates and then dress for the varsity game where we would play special teams.  From sophomore through senior year, Candelet was the game-changer on special teams, a talented option at running back, and a punishing defensive back for the Blue & White.

Candelet was part of the dramatic 7-3 victory over North on Thanksgiving Day in 1984.  The speedy Candelet was in on over 10 tackles from his defensive backfield position, along with being a threat on special teams.  Wearing number 29, standing 5’-8” and weighing 150 pounds, Candelet may have been undersized but his determination, heart & desire shined through on each play.

Hall of Famer Jon Dascom and the experienced Candelet were constantly a threat to return a punt or kick-off for a touchdown.  Against Coyle Cassidy at Hopewell Park, Candelet scored two touchdowns, one on a pass reception from Hall of Fame QB Jim Hanewich, and the other a terrific 76 yard kick-off return.  Two weeks later Candelet was at it again,  returning a kick-off 86 yards for a touchdown against a talented New Bedford team at Tozier-Cassidy Field.  Kevin’s trademark touchdown came against the #1 team in Massachustts, the Xavieran Hawks in week 9.  Xavieran had not allowed a rushing touchdown all season until the deviously quick Candelet scored to keep AHS in the game.  Candelet, playing in his forth Thanksgiving Day game in 1986, helped lead the Blue & White to a 6-6 tie against the Red Rocketeers.

For his outstanding play Kevin was recognized by both the Sun Chronicle and Eastern Athletic Conference.  Kevin joins his grandfather  Milt Candelet in the Attleboro Area Hall of Fame.  Kevin continued his athletic prowess at Springfield College, and he later returned to AHS where he to helped coach the1998 Bombardier basketball team to the state championship.  Kevin current resides in Attleboro and owns KC Builders, Inc.