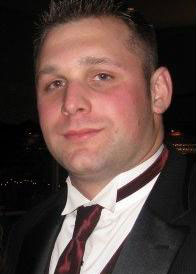 Louie DiBacco was a true Blue Bombardier.  His intelligence, work ethic and leadership enabled him to play three varsity seasons for .  The physical DiBacco played three seasons at center for Cliff Sherman’s Big Blue and numerous positions on defense.  DiBacco “was an exceptional run blocker with his footwork and ability to drive back defensive tackles” the Sun Chronicle noted.  Louie was consistently in the right position to make the big block on offense, while defensively DiBacco routinely came up with the big stop.

During DiBacco three contributing seasons the Bombardiers always excelled at running and passing.  Louie could often be found opening holes for Hall of Fame runners Jason Baker, Tim Slowey & Seth Lopes and protecting Hall of Famer Nick McNamee to make the big plays downfield.  Louie’s tenure at Attleboro was a success as the Blue and White participated in two Super Bowls while achieving a 13-2 record.  During Louie’s senior season the experienced 218 pound DiBacco was selected co-captain for an team that averaged close to 30 points and nearly 200 yards of rushing per game.  In trouncing Bishop Feehan, 26-7, “the Bombardiers’ gained 253 yards on the ground with interior linemen Lou DiBacco and Hall of Famer Mike Haynes working wonders with their blocking, enabling Slowey to scoot free”, the Sun Chronicle reported.

Defensively, the powerful and versatile DiBacco was a handful playing nose tackle, tackle, defensive end and linebacker.  Louie is credited with 121 tackles, including two quarterback sacks.  Big Blue’s defense allowed 13 points per game along with three shut outs.  In beating , 32-0, Louie was credited with a multiple tackles in the backfield, while opening holes for three touchdowns with help from fullback Mark Owens and his line-mates.  DiBacco is known for his steady aggressive play on both sides of the ball, but his demeanor and knowledge to guide his line-mates from his center position separated him from other area lineman.

Louie DiBacco received All , Evening Times and Sun Chronicle honors for his outstanding play. Currently Louie is employed by the Massacusetts Department of Development Services, and he resides in Attleboro.