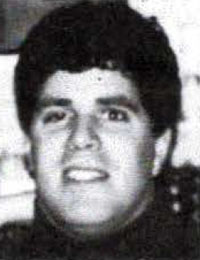 In 1977 and 1978 Scott Dubuc was an outstanding offensive halfback and a brilliant defensive safety for the Attleboro Blue Bombardiers. Attleboro's most versatile and best all-around athlete, Dubuc combined his great track speed and athletic ability to and devastate opponents from both sides of the line of scrimmage. The 6'0" 175 lb. halfback would slash and finesse his way through opposing lines and use his great speed to race away from defensive backs. Also recognized as the best defensive safety in the conference, the track hurdler and 6'4" high jumper, used all of his great naturaJ skills to completely neutralize the opponents passing game.

In 1978, the versatile Co-Captain's brilliant season included a touchdown run and interception in a win over Falmouth, three spectacular interceptions in a heartbreaking 7-6 loss to Feehan that earned him Boston Globe Player of the Week honors, and an outstanding offensive display while gaining 120 yards on 13 carries in a great 22-14 victory over the always tough Dartmouth.

Dubuc's football skills did not go unnoticed by opposing coaches and sportswriters. He was a first team selection offensive and defensive halfback by the Southeastern Mass conference coaches and the Taunton Gazzette and a two year first team AlI Sun District defensive back. ln addition, Scott received the ultimate recognition by the area coaches when they selected him to play in the Inaugural Massachusetts Shriners All Star Game.