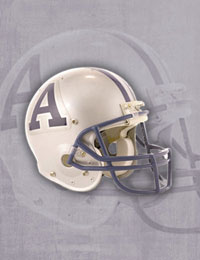 John Dion was an outstanding two year starter at offensive and defensive tackle for the Blue Bombardiers in 1973 and 1974. Although at 5'10" and 168lbs. he lacked the size of most of his opponents, the hard charging Dion played with great hustle, determination, and a huge football heart. A great two-way player, John utilized his excellent quickness and technique to throw the key blocks in Attleboro's running game or blast by his opponent to disrupt the opposing teams offense.

In 1974, under new head coach Tom Crowe, Co-Captain Dion's leadership skills and determination set the perfect example for a young and inexperienced Bombardier football team. John quickly adjusted to Coach Crowe's new and changing defensive schemes and led an outstanding Attleboro defensive effort in a 8-6 win over a very powerful Franklin team which included a brilliant goal-line stand to preserve the victory. In a 33-6 rout of Bamstable, Dion's blocking consistently led the way for the AHS backs as they romped through the Red Raider front line. And, in a huge 29-14 victory over a tough Dartmouth team, John Dion had two quarterback sacks "and was a terror on defense all day long."

As an All Sun District selection John was described "as a great hustler and team player if there ever was one. Although a shade small for a tackle, it makes little difference because in his heart he knows he will get the job done." Coach Crowe stated that "John was like a coach on the field, and his leadership and hustle brought his team together."