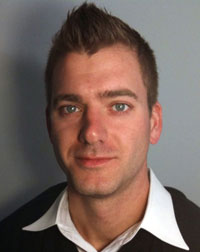 During the 1994 football season Hall of Fame quarterbacks Tom Sherman’s and Ted Larkin’s go-to target for a big reception was always Eric Buckley.  Buckley was a dominating all teams starter for a talent-heavy Attleboro Blue Bombardier squad that was “on a mission”.  The 6'3" senior receiver and defensive end was considered the big play maker for the 9-1 Bombardiers.

On offense Buckley averaged 20 yards per catch while tallying 23 receptions for 495 yards, 9 touchdowns, and a total of 64 points.  In a dominating early season victory against King Phillip Buckley reeled in two 31-yard touchdown receptions.  A victory over EAC opponent Bishop Stang saw Eric tally five catches for 90 yards, one touchdown and a conversion, and in a 36-19 win over the Somerset Raiders the sure handed Buckley grabbed seven passes for 118 yards and three touchdowns.  Buckley saved his best performance for last during Attleboro’s dominating 22-8 victory over North Attleboro on Thanksgiving Day, when he hauled in 5 more catches for an impressive 112 yards and one touchdown.

Buckley’s gridiron prowess was not limited to the offensive side of the ball.  His defensive and special team skills were just as valuable to the Blue and White’s success.  Early in the season against Coyle Cassidy Eric blocked three punts on his way to a total of 6 blocked punts on the season.  In 1994 opponents’ game plans were often to rush the ball away from Hall of Famer Chris Burns, but then soon found they were running into a weak-side DE that garnished 8 sacks and 53 tackles that season.  Buckley’s defensive highlight came on Thanksgiving Day when his fumble recovery ended North Attleboro’s first bid to get back into the game, while a 16 yard sack by Buckley ended another Big Red chance.

Buckley mentions “easily the highlight of my football career was beating North Attleboro.” After the game Buckley stated “We knew we were coming out here to complete the mission.  We knew we weren’t going to lose.  There was no doubt in our mind.” Eric’s offensive and defensive play certainly was a factor on that day.  His contributions helped propel the Blue and White of Attleboro to their first Thanksgiving Day victory in over ten years.

Eric’s accomplishments also include Sun Chronicle and EAC all star selections during the 1994 season.  He now resides in Abington with his wife Rachel and their two children Aidan and Jameson.

Trackback https://www.attleboroareafootballhof.com/hof/630/7d5/trackback
Up Down Print
?